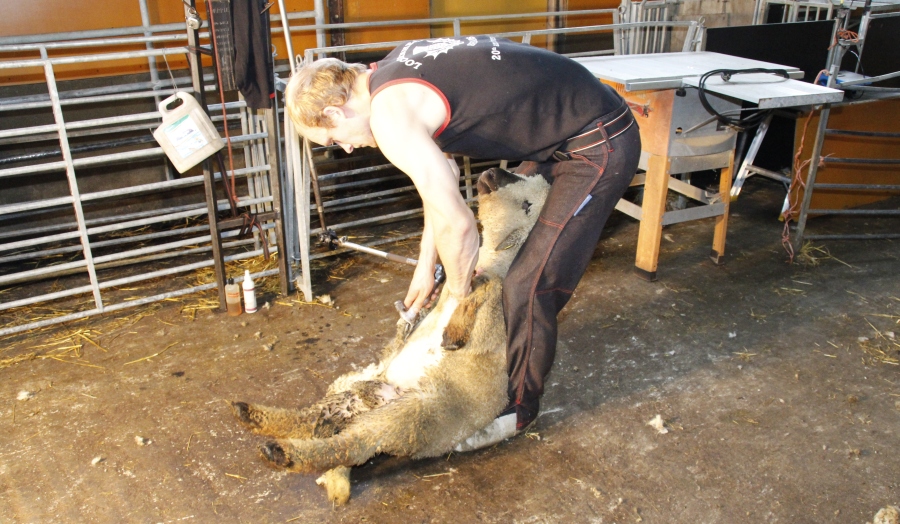 As the wool of the Oxford Down sheep does not felt easily, it is often sufficient to shear the sheep once a year. For the wellbeing of the animals, shearing every 8 months, however, is recommended. The easiest method is to place the sheep to be sheared in a small pen where you can get hold of it easily. Using a shearing frame, which can be lifted from the floorlevel to the working level, spares your time and your back. The work is much easier if the blades are in good condition and they are cleaned and oiled often enough. Each of us develops our own preferred routine of shearing, but we have found it fastest to cut one run in the middle of the back and then starting from this shear the sides, neck and underneath in one piece of fleece, and then finish of the head, legs and tail.

Taking care of the hoofs is a hard but a very important procedure. As the Oxford Down is a large and heavy breed, taking care of hoofs is particularly important in order to avoid feet problems. The overgrown hoofs are first trimmed using special hoof trimming shears and then the outside horn bent underneath is trimmed off. For a small, young sheep this procedure can be carried out by sitting the animal in front of you but for larger fully grown sheep it is best to lay the sheep on its side inside a shearing frame.

When the hygiene of the pen and the pastures is taken care of the need for prevention of internal parasites is greatly reduced. Ewes and fully grown rams are dewormed in April, which is the time of the year when the internal parasites get more active due to increased light level. Later in the spring and in the summer we deworm only those adult animals that show symptoms (diarrhoea, weight loss, itching etc.). Lambs are dewormed between 2-3 weeks after the beginning of the grazing season or weaning.

The lambs kept for livestock are dewormed in the autumn at the time of shearing and every sheep sold is wormed before delivery. The new regulations have made it more difficult to get hold of worming preparations suitable for sheep, there is practically speaking no over-the-counter preparations and price of the worming preparations available through a veterinarian often is so high that it only makes sense to worm the sheep when there is a clear need for it.