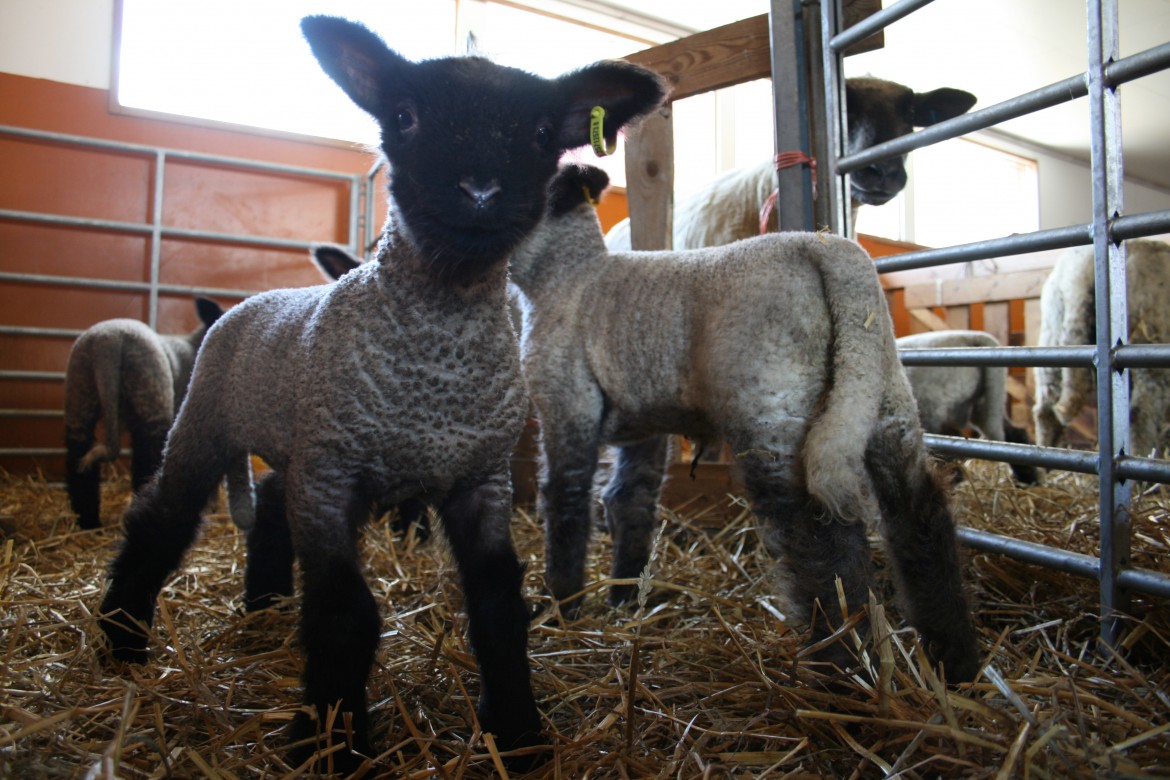 Apr
09
Lambing Time – Hustle and Bustle All Around!

The first lambs from our Latvian import rams Rudolf and Pontus were born in mid-February, and since then our farm has seen a steady stream of the miracle of birth. The suspense concerning the success of the import rams’ mating eased up, as one ewe after the other gave birth to equal-sized twins without any […]

The first lambs from our Latvian import rams Rudolf and Pontus were born in mid-February, and since then our farm has seen a steady stream of the miracle of birth. The suspense concerning the success of the import rams’ mating eased up, as one ewe after the other gave birth to equal-sized twins without any major problems. It’s the beginning of April, and the first lambing group has finished producing over one hundred speedy rascals who race around the sheep barn. The first due dates of the second lambing group are in mid-April, and that marks the beginning of the final stretch, as about 80 ewes will give birth in the three weeks to come.

The ewes have been split into groups based on their due dates, which are known by markings done during the mating in fall. This is important, so that the nutritional values of the feed mixture can be adjusted appropriately when the due date draws nearer. The different ewe groups need to be provided with slightly different nutrition, which means an increase in our workload in multiple stages of the work. The logistics of the sheep barn also need to be well thought out so that different spaces can easily be used for different things as the lambing progresses.
You can probably imagine that with all this, the pace of work during the lambing season is often hectic – sometimes even around the clock. On our farm, we use surveillance cameras to keep an eye on the lambing, especially at night. This lets us see signs of upcoming births and monitor ongoing births without leaving the house. Naturally, a well-trained eye can spot births that may happen at night in advance while checking the pens in the evening. Most of the ewes can handle giving birth on their own, but sometimes assistance is needed, for example, if the lamb is coming out at a bad angle.

After lambing, the ewe and her lambs are moved to a lambing pen and the lambing is marked in the calendar for later registration. The lambs are placed to dry under an infrared lamp and the ewe’s udders and milk-producing ability are checked. If necessary, the colostrum – the milk produced by the ewe after lambing – can be milked and fed to the lambs with a feeding syringe. While they are in the lambing pen, it is easy to keep an eye on the ewe and her lambs and to offer the ewe more nutritious food during the first few days after lambing. When the lambs are about three days old, we weigh them, examine their eyes and check that they are clean under their tails. Then we feed them vitamins A, D and E; finally, we earmark them. After this, the lambs and ewes are ready to be moved to a bigger pen, where they get used to the other sheep and being in a larger group. The lambs have their own chamber built inside the pen, where they have their own feed and minerals. The curious and nimble lambs are quick to frolic all over the place in a large group, and the cleverest ones always find some route to the corridor of the sheep barn, where they can bask in the spring sun. Luckily, they usually also find a way back to their pens, so that we sheep farmers don’t have to run after lost lambs here, there and everywhere!