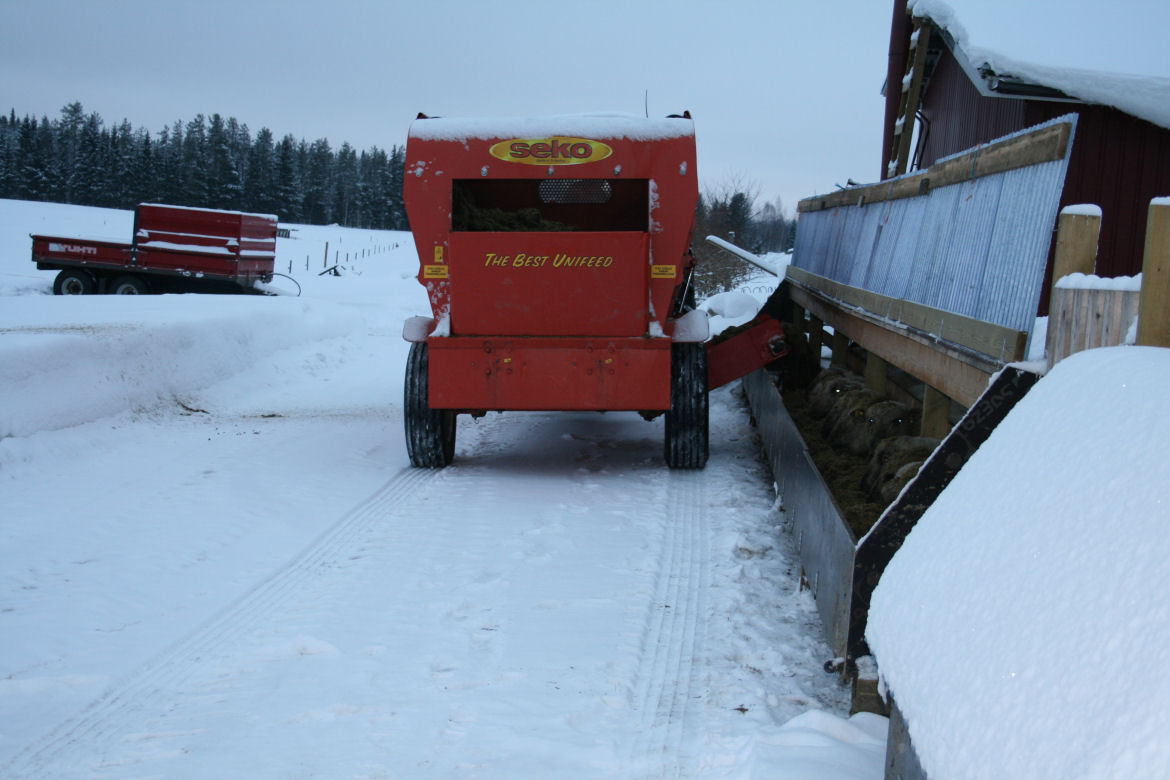 Oxford Down is known to be a good grazing breed and thus it makes sense to make most of the grazing season for both strengthening the ewes as well as maximising the growthrate of lambs. About one hectare of farmed pastures is needed for ten ewes with their lambs, towards the autumn the area needed is slightly larger as the pastures grow slower and lambs are getting bigger. Weaned ewes can also graze on traditional biotopes or forest-pastures.

For the pastures where lambs graze, it is worth increasing the protein content by sowing for example clover. Cosequently, grazing on these pastures it is possible to achieve a bodyweight of 22-25 kg at the age of 5-6 months and daily growth rates of about 250-350 g. In addition to good quality pastures, the sheep will only need access to clean water and minerals designed for grazing season.

It is also recommended to place a salt lick nearby the sleeping area and a good grazing area needs either some woodland or covered area to shelter from heat on hot, sunny summer days.

The indoor feeding period of ewes can be divided roughly into three principal periods: feeding during breeding, pregnancy and nursing. As the Oxford Down breed is not suited for all year lambing, so called flushing-feeding which prepares the ewes for breeding always takes place towards the end of the summer or early autumn. If grazing period has been planned properly, moving ewes to new, good quality pastures is sufficient for flushing. Otherwise, for about 2-4 weeks before breeding, the ewes are likely to need supplementary feed depending on their body condition. It is most economical to prepare the supplementary feed in-house. The sheep will eat grain whole, and thus there is no need for milling or crushing. All grains are suitable for the supplementary feed (however, rye should be used with care), additional protein can be obtained by using either rape, which is more economical, or more tasty soy. How much additional protein is needed depends on the protein content of the rough fodder used. For rough fodder both dried hay or silage can be used. We have got very good results using pre-dried chopped silage. A proper analysis of the feeds used is the basis of successful feeding management.

Good quality straw can also be used, especially in addition to silage, throughout winter. A diligent sheep farmer may also dry some leafy tree branches in summer to be given in the post-lambing period when ewes normally suffer from lack of appetite. On a daily basis, the ewes will need mineral supplements following the manufacturer’s instructions, and naturally the availability of clean, fresh water has to be guaranteed at all circumstances. Salt lick is part of the standard provisions also during the indoor feeding period.

The flushing of ewes after weaning in July-August is essential for successful breeding and it is worth checking the body condition of ewes before allowing a ram in the flock. During the flushing and breeding periods about 300 g of supplementary feed is given per day per ewe when the condition score is below 3, when the score is 3, about half of the amount above is needed and the ewes which are fatter than that should not get any additional feed. Rough fodder is given freely, but as a rule of thumb, approximately 2-3 kg of dry hay or 6-8 kg of silage is given per day per animal. After breeding the amount of supplementary feed is gradually decreased, generally it can be left out altogether during the mid-gestation, if the rough fodder given is good quality silage. Part of the rough fodder can consist of straw depending on the condition of the ewes.

During breeding the rams that are kept with the ewes get the same supplementary feed. After breeding, the rams that are in good condition will do well with a minimal (100 g per day) or without supplementary feed. Mature rams, not in breeding, can be fed only once a day. Clean, fresh water, minerals and salt lick are part of the standard diet for rams also. In addition, rams like to eat branches of spruce or bark from tree trunks. This kind of ‘past-time’ also decreases the likelihood of squabble between rams, especially if the ram flock is big.

During the grazing season rams can be placed to weaker pastures or forest-pastures, as long as the supplementary feeding is started sufficiently early before breeding.

Oxford Down lambs are normally trained for eating supplementary feeds at one week of age using so called creep-feeder. To start with, a protein-rich creep feed mix, e.g. one of the commercially prepared lamb creep feeds, can be made freely available, but after about six weeks of age it is sufficient to give a portion of supplementary feed twice a day, a portion of about 300-600 g per day is advised depending on the target daily growth rate. We also tend to keep the daily feed mix freely available for the lambs. When lambs are moved to pastures, supplementary feed can be left out and at about three months of age the lambs are weaned from the ewes by moving them to their own pastures. At the same time it is a good opportunity to separate the male and female lambs to their respective pastures. Lambs that have been reared on good pastures are muscular but not fatty.

Our experiences of mixer feeders for sheep feeding

In autumn 2005 we purchased SEKO Samurai mixer feeder. As there is not much experience of the use of mixer feeders for sheep, not to mention published research, we have selectively adapted mixfeed recipes meant for cattle. I find the lack of software for calculating the proportions of different classes of feeds in the mixture, the biggest letdown. This means that the calculations have to be done by hand using traditional worksheets and as a result the optimal mixture for each feeding stage can only be found by trial-and-error.

We prepare the mix daily and distribute the feed also once a day. Sometimes, in the coldest winter days a smaller portion of feed is given twice a day. One advantage of the mixed feed is that when animals are kept and fed together, there is little competition. On the other hand, the animals have to be within the same stage of production so that a single mix can be used each day. In our farm, the flushing of ewes in the autumn coincides with the feeding the last sheep for slaughter, which allows just one mix to be prepared. During the nursing, we have solved the problem of different needs of ewes so that the mix is prepared for the ewes with twins; singles get slightly less mix and additional dry hay, and the ewes nursing triples get some supplementary feed on the top of the mixed feed. The lambs get the same mix and an additional creep feed.

Mineral supplements are freely available and are given together with the vitamin supplements on the top of the mixed feed to secure even distribution. The loss of feed is negligible because the mixer feeder easily chops even the coarsest feed such as dry hay and wholemeal silage, producing a fine mix, which the sheep will eat thoroughly.

The mixed feed has also been good for the growth of the lambs, but we have noticed that mixing the feeds results in more efficient growth than giving the feeds separately and therefore it is important to pay attention to the energy content of the feed to avoid excess fat on lambs.

The required quality of feeds used for the mix is the same, as when they are given separately as one poor quality component will spoil the mix. We have found, however, that there is a significant saving on the workload and the time spent – preparing the mix takes about half an hour and delivery about quarter of an hour daily. We have, therefore, much more time for other tasks such as inspecting the sheep and talking to them.